Rowing & Canoeing on the Calder

Rowing & Canoeing on the Calder

There were a large number of Rowing Clubs up and down the river sections of the navigation during the 19th century including Mirfield Amateur Rowing Club based at Battyeford near the current site of the Pennine Canoe & Rowing Club as well as clubs at Brighouse, Ravensthorpe, Dewsbury, Horbury Bridge and Wakefield. The first recorded rowing regatta on the river Calder appears to have been at Wakefield in 1850 with regular summer regattas taking place there up to 1880’s. Mirfield ARC also held their own regattas between 1859 to 1865, with Dewsbury & Horbury running also regattas from time to time. Many of these events were very well attended occasions; the Huddersfield Chronicle of 30th July 1864 reports a crowd of 20,000 watching the Mirfield regatta with special trains being laid on to bring in the spectators. Many of these events included additional disciplines such as swimming, running and even more bizarre events like walking the greasy poll across the river and pig chasing. 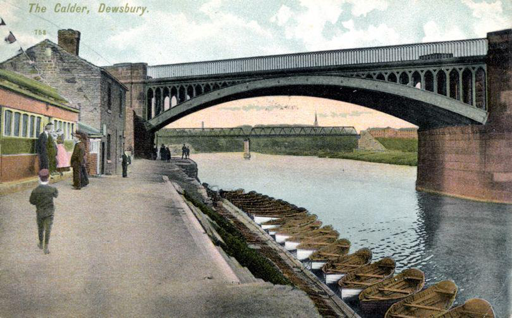 The oldest record of a canoe race on the river Calder that I can find appears to be held at the Wakefield regatta in August 1869. First prize was for the Rob Roy Plate won by Mr A.Elliot of Lincoln Rowing Club (Rob Roy being an early type of racing canoe which looks a little like an open canoe, but is paddled with twin blades much like a kayak) There are also records of a canoe race taking place between the Mirfield and Ravensthorpe Rowing Clubs at the Ravensthorpe regatta in September 1884 which was set up to raise funds for the Dewsbury Infirmary. The above picture shows what I believe to be the location of this race; Dewsbury can just be seen in the background.

There are also records of canoe races taking place during the Leeds rowing regattas on the river Aire at Kirkstall Abbey as early as 1870, with a cash prize of £1 10s for first place and 10s for second. At today’s rate that would be equivalent to £129* for first place, considerably better than any of the prizes I’ve seen offered at modern day canoeing events.

The club appears to have been very active during the 1860’s & 70’s with a core of members entering most of the main rowing regattas in the area, including the Wakefield, York, Manchester, and Leeds events. There are even reports of a Mirfield crew entering the four-oared race on the Thames between Putney and Hammersmith on 17th August 1872, this crew included W.Mallinson, J.Brook, Job Lee, & Joseph Rushforth with the appropriately named G.H.Cox at cox . A search of the records brings up a number of Mirfield family’s actively involved in the club at this time including: Oats, Ledgard, Mallinson, Brook, Ellis, and Woodcock, with Richard Ledgard, John Mallinson, and Wallace Mallinson seeming to be the main players, certainly with regards to racing for the club.

Leisure Boating on the Calder. 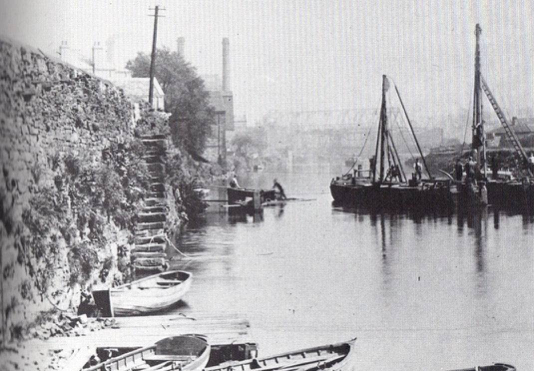 There are a number of places where you could hire boats on a Sunday afternoon during the 19th century, providing inexpensive leisure opportunities for the general public long before the current growth in interest in watersports.  However reading through the various newspaper articles of the time this activity was not without danger with a number of drownings reported and no checks on the quality or suitability of the equipment on hire. A far cry from today’s health and safety culture ware you need a risk assessment to even look at the river.

The picture opposite shows boats for hire at Battyeford in Mirfiled, the image above is of a similar establishment at Ravensthorpe and I know of at least one other at Colne Bridge just before the river Colne flows into the Calder at Cooper Bridge.  I’m sure there were others in the Wakefield, Dewsbury, and Brighouse areas and this will form part of our ongoing research.

The Regatta. – On Saturday afternoon last, the fifth annual regatta took place on the river Calder at Mirfield, in the presence of at least 20,000 people. Visitors thronged the river side, filled the grand stand and scores of barges, occupied the bridges, and took coign of vantage on sundry elevated spots. The railway companies ran special trains from Huddersfield, Halifax, Bradford, Brighouse &c, and sundry omnibus proprietors reaped a good harvest by carrying passengers from Dewsbury and other places in the neighbourhood. The day was beautifully fine, and all the people seemed to enjoy themselves most heartily. Not a single accident that we have heard of marred their pleasure. The first race was one for four-oared boats, 23 feet length over all, for a first prize of £5 and a second of £2. There were four entries, and all, to use a phrase current in sporting circles, came to scratch at the sound of the starter’s bell shortly after one o’clock. A fair start was made. The boat “Rocky Road” soon took the lead, and maintained it to the end, won the first prize; “Whitch” being a good second; and “Lads About” third. Time, 121/2 minutes; distance, 2,480 yards. The next event was a single was a single-oared race, in which H.Aultsen, in the boat “Hollingsworth” had it all his own way from beginning to end; Geo.Naylor, in “Lewis” being a bad second. There were three other competitors, but they were “nowhere” Distance, three-quarters of a mile. A two-oared race, in boats 23 feet long, took place next, over the first course. There were four starters, but the race was virtually between three, viz. – “Witch” “Rocky Road” and “Lads About” The first named came in five lengths ahead of the second, but there was only three-quarters of a length between the latter and the third. The great race of the was one for four-oared boats, the price being the Prince of Wales’ stake £10, with prize of £5 for second boat. It was run in heats, the distance being 2,480 yards out and home. In the first, “The Five Friends,” “Colleen Bawn,” and “Hollingworth” competed. The “Colleen,” which was manned by a Manchester crew, won easily, and many bets were laid that it would beat the “field” In the second heat, the “British Queen” carried off the palm, but when the deciding race was pulled off the Manchester men won easily. There was also a sculling race, in which Fred Oats took the first prize and John Bottomley the second. This was followed by a swimming race, in which about a dozen professors of the art of notation took part. After the races were over, some pole-walking for a couple of pigs took place, the said pole being laid horizontally over the river, and well greased. Much amusement was caused by the many unsuccessful endeavours made to untrap the pigs (they were suspended in a box at the end of the pole), and save themselves from a ducking. When the pigs had been caught, an adjournment was made by a portion of the company to a field where a gala was held, and dancing and rustic sports indulged in. The Hopton and the Huddersfield Rifle Corps brass band were present and added much to the pleasure of the visitors