The History of the Calder & Hebble Navigation, running for 21 miles from Sowerby Bridge to the Aire & Calder Navigation at Wakefield, was one of the first navigable waterways into the Pennines. It was an extension westwards of the Aire and Calder Navigation and was surveyed by John Smeaton and the later sections by James Brindley. 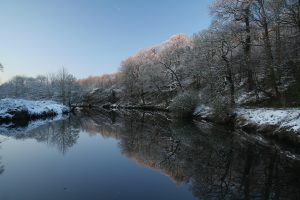 Work began in 1758 to make the River Calder navigable above Wakefield. The navigation to Sowerby Bridge was completed in 1770, including a short branch to Dewsbury. Sir John Ramsden’s Canal, now known as the Huddersfield Broad, was opened in 1776, providing a branch to Huddersfield.

In 1804, the Rochdale Canal opened, branching off the Calder & Hebble just before its terminus in Sowerby Bridge, crossing the Pennines to link Yorkshire with Manchester.

Various improvements were made over the following years, including new cuts at Mirfield and Brighouse and the construction of new locks.

In 1828 a branch to Halifax was opened, rising 110 feet to a terminus at Bailey Hall, behind Halifax Railway Station. There were 14 locks on the branch. Most of the branch was abandoned in 1942 apart from the short section from Salterhebble to Exley. 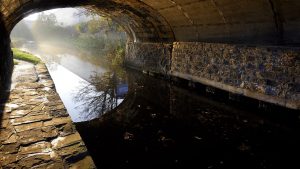 During the navigation’s busy years, it was improved continuously. In 1804 the Rochdale Canal was opened between Manchester and a junction with the Calder & Hebble just short of its terminus at Sowerby Bridge. This brought a lot of through traffic along the Calder & Hebble, including sea-going barges travelling between the Humber and the Mersey.

Most commercial traffic on the Calder & Hebble had ceased by 1955, although coal was still carried to Thornhill power station until 1981. However, the whole of the Calder & Hebble remained open for leisure use. The re-opening of the Rochdale Canal between Sowerby Bridge and Littleborough summit in 1996 and Manchester in 2002 has increased the traffic along the Calder & Hebble and it now forms part of the South Pennine Ring.

The whole navigation between Wakefield and Sowerby Bridge is now very popular with leisure craft and on a sunny weekend, there are plenty of craft on this route. That said it is still ideal for canoeing as it’s a safe, mainly flat water trail with large sections where a paddler will have the water to themselves for much of the time. Please read our guide to understand the features and areas that may require a little planning.