The navigation, which is part-canal and part river, connects the Yorkshire and Pennine canals and provides easy access canoeing in the Pennines. Canal enthusiasts will appreciate the unusual waterways architecture, including quirky lever-operated locks.

The small towns of Brighouse and Sowerby Bridge are full of interest and local colour, while Wakefield has many attractions, including a redeveloped waterfront area, the Hepworth Art Gallery. 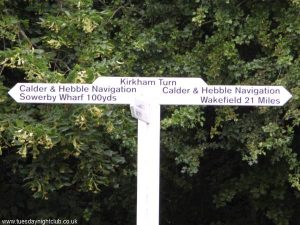 Now that the Rochdale Canal and Huddersfield Narrow Canal have been restored, the Calder & Hebble is once again an essential part of the waterway routes across the Pennines.

Running for 21.5 miles between Sowerby Bridge and Wakefield, the Calder & Hebble was designed to extend navigation from the Aire and Calder Navigation at Wakefield to Halifax, and later Sowerby Bridge. By 1770, navigation was possible along the upper reaches of the Calder.

The canal joins the Huddersfield Broad Canal at Cooper Bridge, and the Roc 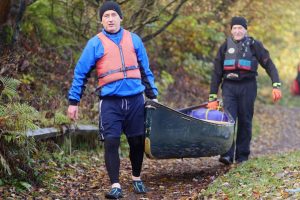 hdale Canal at its Sowerby Bridge terminus. Since the Calder & Hebble’s locks are shorter than those on the Rochdale, the warehouses at Sowerby Bridge were used for transhipment – storing cargoes after they were unloaded from one size of boat, ready to go into another. These spectacular warehouses are now being restored with the help of a substantial Heritage Lottery Fund grant.

This is a 21.5 mile paddle on the Calder & Hebble Navigation from its start at the canal basin in Sowerby Bridge to where it meets the Calder & Aire Navigation in Wakefield. This is a combination of canal and river paddling, starting off on the canal for the first x miles, until you pick up the river at Brighouse, then it’s a combination of river / canal until you reach Thornhill Lees, from here its canal again until just after the Navigation Pub on the outskirts of Wakefield. The last section is the river Calder to its finish at the Hepworth Gallery in Wakefield.

I’m currently working on planning the route for the canoe trail via the river only without using the canal network, this will mean working out where we can and can’t shoot the weirs. This video is of our first attempts to master the Battyeford weir in a K2 marathon kayak, just upstream of Pennine Canoe…

The team from the Calder & Hebble Canoe Trail have now completed the new canoe jetty at Saville Town basin in Dewsbury. This allows paddlers to visit the wonerfull marina in Dewsbury with its pub and cafe, or start out from here if they ony wish to do part of th trail.

We are planning on doing the first full length paddle of the Calder & Hebble Canoe Trail on Saturday 1st July,  if anyone wants to join us. The plan is to leave Sowerby Bridge at 10am and hopefully complete the full 21 miles to Wakefield by mid afternoon, please feel free to contact David on info@calderhebblecanoetrail-co-uk.stackstaging.com…

Sean Guy, the Mayor of Mirfield, joined us before leaving the Pennine CRC jetty at Battyefor on our Inaugural paddle of the Calder & Hebble Canoe Trail today. Thanks to Mirfield Town Council for all their support and to Sean for meeting us for breakfast at the Pear Tree before taking to the water.

The Calder river is a typical Pennine river, for much of the course it flows at a relatively low level with a large number of shallow parts on the non navigation parts of the river. This is why the navigation company built a number of weirs in the 1760’s to raise the level to allow working barrages to ply their trade up and down its length from Wakefield to Sowerby Bridge.

If you are sticking to the navigation you will have no problems with shallows, however due to its nature when we get heavy rain on the Pennine hills above Hebden Bridge and beyond we can be faced with a different story. There are a number of flood locks on the length of the canoe trail when heading down river onto one of the many canal cuts, these are normally left open at all times unless the river is rising rapidly in which case the Environment Agency will close them. The information on their closure can be found on the Environment Agency’s website and we would recommend you check this before planning your journey on the river sections. We would also strongly advise against doing this trail if the flood locks are closed.